In one of the most dramatic moments to celebrate Australia Day, Australian Prime Minister Julia Gillard lost a shoe and was dragged by his bodyguard when an angry mob of indigenous people rounded up a restaurant in Capital Hill hunting for Opposition Leader Tony Abbott. 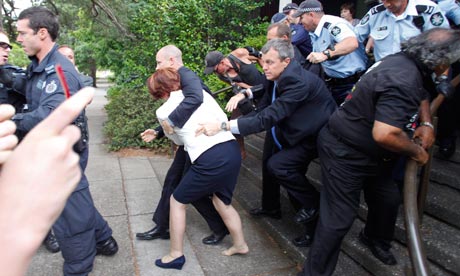 Bodyguard bundles up Julia Gillard from the angry mob

The prime minister and the opposition leader were in The Lobby restaurant to present the national emergency service medals  as part of the Australia Day celebrations.

The drama unfolds as the celebration began. A man in black T-shirt emblazoned with Aboriginal flag watched the proceedings through the restaurant’s glass façade. Then  a woman barged in to scatter petals of roses before she shouted when Gillard was presenting 26 service medals.

About half of the 200 protesters circled the restaurant, banged the glass windows, and chanted “shame” and “racist” while calling for Abbott to come out.

About 200 protesters from the Aboriginal Tent Embassy nearby have gathered to mark its 40th founding year today. A series of cultural performances and entertainment has been planned through the weekend to celebrate its founding but marred by such an “extraordinary” incident.

The protesters rounded up and stormed The Lobby to confront Abbott following the opposition leader’s comment earlier during the day. The SBS said Abbott has called for the disbandment of the tent embassy noting time has changed and therefore it is no longer relevant. The SBS quoted Abbott as saying, “I can understand why the tent embassy was established all those years ago,…  think a lot has changed since then, and I think it probably is time to move on from that.”

Riot police came to rescue Gillard and Abbott while trying to pacify protesters. But protesters said they stormed in to confront Abbott without knowing he was with Gillard. They insisted Abbott incited the riot, not the Aboriginal people of the tent embassy. Towards the end of the day, the protesters are demanding for Abbott’s apology.