Australia’s famous New Year’s eve fireworks at the iconic Sydney Harbour Bridge made another landmark spectacle to impress the world. But after the pyrotechnics have died down, the country-continent faces the reality of dealing with the temperatures soaring to over 40 degrees Celsius. 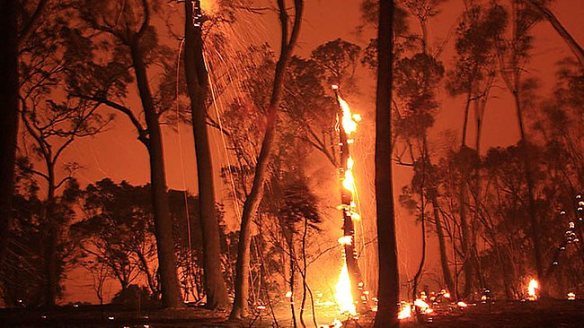 The Black Saturday flares up in Victoria (News Ltd)

The heatwave spreads throughout Victoria and South Australia. Melbourne and Adelaide started the year with day time high of 40 degrees Celsius and will remain at 30 level until tomorrow, AAP reported. Sydney and Brisbane are reported to have a more tolerable levels at around 26- 28 degrees Celsius, while Perth will experience around 31-degree.

Holiday-makers who are heading to the bush in the southern states are warned not to put up campfires. Fire and safety authorities have already issued bushfire alert warnings to caution residents and tourists to be bush-fire-ready.

A total fire ban has been issued in many regions in Victoria including tourist destinations such as the Southern Grampians, Apollo Bay, Warnambool, and other southwestern areas. The fire ban strictly disallows campers to build a campfire during the night while frolickers are also not allowed to light up a barbecue grill.

Two years ago, the bush fire famously called the Black Saturday razed 450,000 ha (1,100,000 acres) in Victoria sending residential, agricultural, and touristic areas into ashes. Affected areas included Kinglake and Whittlesea, Marysville, Central Gippsland, Beechworth, and to as far as the old gold town of Bendigo bringing to a total of 170 districts affected.

In 2006, the Grampians National Park was engulfed by another massive bushfire which burnt 130,000 hectares — or 47 per cent of the park.

Sam the koala became famous around the world after this photo was taken during the Victorian bushfires. (Reuters)

The Royal Society for the Prevention of Cruelty to Animals estimated that over a million of animals have perished in these bushfires. Other wildlife species have suffered from severe burns. Koalas and kangaroos which inhabit most of the bush habitat are most affected while the Leadbeater’s Possum, Victoria’s faunal emblem, is under further threat to extinction.

This koala became homeless after the fire (News Ltd)

South Australia is reported to have issued total fire ban on 13 districts out of 15.