It has been a quiet winter for Green advocacy, but here’s a media release from the Huon Valley Environment Centre (HVEC):

The HVEC has released a statement by Penan people in Sarawak, who names Ta Ann as the company leasing their land for logging without prior consent or knowledge by the indigenous Sarawakians.

The group has also exposed that Liberal Senator Eric Abetz has visited Sarawak in the past weeks, and travelled to the contested area with Ta Ann.

“Our organisation has released a letter fingerprinted by Penan peoples tating they want Ta Ann off their land, this is an unprecedented show ofopposition to Ta Ann logging of their land, after the company has leased theland without the knowledge and consent by the indigenous Sarawakians,” spokesperson Jenny Weber said.

The letter from the Penan people states; “This area should not be re-logged as it wasbeing logged in the past which have made our livelihood difficult especially our food resources. We with one voice that we don’t accept any type of loggingto take place within our Native Customary Rights Land,” 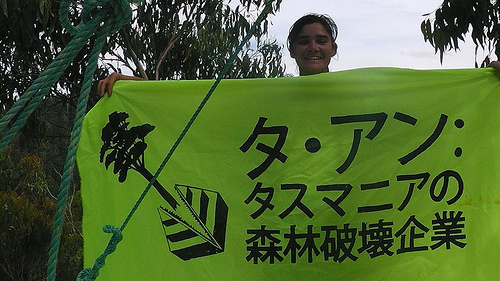