Investors for natural resource exploration company Buru Energy’s AUD $30.8m plans to frack for gas in Western Australia’s ecologically sensitive Canning Basin have been warned of the various risks posed by the project. The backers have also been told to expect more protests from local communities should the energy company continue to push for the project, which is due to be implemented upstream from a heritage site in WA’s Kimberley region.

The Australian Conservation Foundation (ACF) issued the alert recently, raising the company’s financial viability, along with its engineering integrity in other operations as prime concerns.

Buru Energy has been looking into the feasibility of fracking for gas in the South Kimberley’s Canning Basin since the company demerged from ARC Energy in 2008. The project includes fracking for unconventional tight gas, oil, and condensates. Among its partners are Mitsubishi Corporation, Coogee Chemicals, and Rey Resources.

ACF’s Kimberley Project Officer Wade Freeman said Buru’s plans for hydraulic fracking in the region have the potential to cause serious damage to underground water as well as historical and cultural values for local communities. Buru’s exploration permits cover the beach resort town of Broome’s aquifer, an area of floodplains and lakes that feeds Broome’s only drinking water source, Freeman added.

The ACF has also raised concern that Buru’s fracking plans present a genuine threat to the health of the Fitzroy River and Roebuck Bay. Instead of investing in risky fossil fuel industries for the short term, the conservation group said there are other sustainable options based on The Kimberley’s unique cultural and environmental values.

Opposition towards the project is expected to rise from the local community level on to regional, national, and international spheres. In the state alone, this will likely be a major environmental issue in the lead up to the 2017 West Australian elections. Recent polling suggests the 2017 WA election is set to be a close race. The Western Australian Labor Party has advanced two policies that will potentially end hydraulic fracturing in the state.

National awareness programs are being organised to highlight potential impact of shale gas development on national heritage-listed assets in the region. The states of Victoria and Tasmania have already placed moratoriums on hydraulic fracturing. The Australian Labor Party has recently committed to add shale gas fracking to the Environment Protection and Biodiversity Conservation Act (EPBC) Act’s Water Trigger. 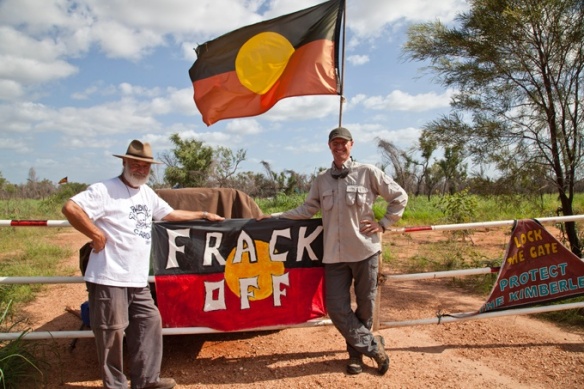 The ACF said the signing of the Paris Agreement on climate change in December last year has shifted global approach towards the issue of energy. In the US, several states have already banned fracking, including Maryland, New York, California, Colorado, Texas, Pennsylvania, Pittsburgh, Washington, Hawaii, and Ohio. Many countries have followed suit, including Germany, Scotland, Wales, Canada, France, Luxembourg, Romania, Netherlands, Spain and Bulgaria. This development is expected to set the momentum of a new era.

Western Australian farmers and community groups have formed an alliance with farmers from Wyoming in the US, warning other communities by publishing their experiences with the detrimental impacts of shale gas fracking.

ACF’s Economist Matthew Rose sent the alert to investment firms, fund managers and individual shareholders. Considering the post-Paris agreement on climate policy, this project raises concern about the increased risks in the region, affecting traditional owners and national heritage-listed values in The Kimberley.

“There are serious risks associated with this project – for the environment and for investors,” Rose said.

Buru Energy’s Quarterly Report published on June 30 shows the company’s estimated cash inflows for the next quarter at $9.5 million for the sale of a pastoral lease asset, and $5.8 million from government tax concessions.

“What is the future of an oil and gas company that relies on selling beef and drawing big tax concessions from the public purse in order to remain viable?” Mr Rose asked.