The annual whale hunt season has arrived in the Southern Seas, which usually starts in December and lasts up to summer, around June. The “notorious Japanese whalers” embarked on their expedition early this month undeterred by the expected interception of the relentless anti-whaling group Sea Shepherd Australia (SSA). The whale activists launched the 10th Antarctic Defence Campaign (ADC), dubbed “Operation Relentless.”

This year expects more violent vessel clashes between the Japanese and the anti-whaling ”pirates”. SSA claims itself to be a defender of the Southern Ocean and all life forms it contains.

Last year, the 5000-ton My Bob Barker was severely damaged when the 8000-ton Nisshin Maru collided with it. The two groups clashed in exchanges that have seen stink bombs thrown at Japanese crew and water jets trained on protesters.

SSA’s “Operation Zero Tolerance” was able to limit the whalers’ haul to a record low of 103 Antarctic minke whales.

Foreign governments have criticised Japan’s whale hunts, alleging violation of the International Whaling Commission’s ban for commercial whaling which it introduced in 1986. Although Tokyo defended its whaling on grounds of scientific research, activists said “research whaling” is a cover up for commercial whaling that is banned under an international agreement. Tokyo also said the practice of eating whale is part of Japanese culinary tradition, and therefore the whales are studied as part of a bid by its whaling research institute to prove their populations can sustain commercial whaling. 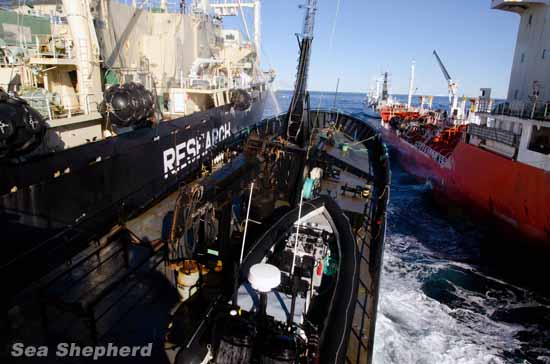 Amid international outcry, two Japanese whaling ships and a surveillance vessel left on December 8 for the annual hunt in the Antarctic Sea. The three ships departed from the western port of Shimonoseki to join other ships to hunt up to 935 Antarctic minke whales and up to 50 fin whales through March, The Kyodo News reported.

The news agency said the Fisheries Agency had kept secret the departure date of the whaling fleet as a precaution against Sea Shepherd.

In Australia, three ships left Williamstown in Victoria and Hobart Port in Tasmania: The Steve Irwin ,The Sam Simon, and The Bob Barker departed to sail southward to confront the sea hunters. In the nine previous ADCs, SSA has saved over 4,500 protected whales from illegal slaughter.

Managing Director of SSA Jeff Hansen said the crew on the ships carry with them the hope, the aspirations, and the expectations of people from across the world who hope to see the end to the annual slaughter.

Captain of The Bob Barker Peter Hammarstedt of Sweden also stated the Japanese whale poaching fleet heading to the south is an offence to an international community waiting on the ruling of the International Court of Justice in The Hague. “Sea Shepherd will now, again, head south as the only authority acting to restore law and order to the Southern Ocean Whale Sanctuary,” the captain added.

Captain of The Steve Irwin, Siddarth Chakravarty of India expects that within a week, he and his crew will be with the whales and will not return until peace has been restored in the Southern Ocean Whale Sanctuary.

This year, over 100 volunteers from 24 countries around the world join Operation Relentless to guard the gates of the southern sanctuary and to uphold the 1986 ban on commercial whaling.

Sea Shepherd Global Director,Alex Cornelissen of Netherlands said, “Like all poachers we encounter in our global campaigns, we will deal with the whalers the same way we always do: Relentlessly.”